This is a dish I had at a restaurant some years back during a trip to New Orleans. There is something about Cajun/Creole food I absolutely love. Maybe it’s because the flavors are big, bold and comforting at the same time. Some think that all Cajun food is spicy, but that is not completely true. Like other cuisines, you can always adjust the spice level to your liking. The Creole seasoning recipe given here I would say the level of spiciness is medium. Feel free to use red snapper or drum fish for this recipe if you do not have catfish. Enjoy! END_OF_DOCUMENT_TOKEN_TO_BE_REPLACED 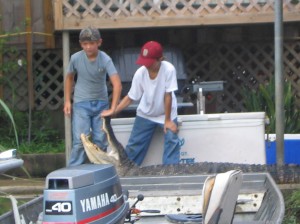 Cajun & Creole cuisine are a couple of my favorite types of food to eat. These cuisines are similar to each other but also quite different, which is something I learned a few months back from my friend, ex-Army veteran, Derrill Guidry.  He is a great cook from Louisiana and should know such things, so I trust him. Also on his food page, The “G” Spot,  he displays his skills in the Cajun and Creole arena. Both of these cuisines have roots stemming from French cuisine, along with influneces from Africa, Spain and to a lesser degree a few other countries. One of the major differences between Creole and Cajun food is in the type of roux (pronounced “roo”) used as the base of sauces, soups, stews, and other savory dishes. Creole roux is made from butter and flour (as in France), while Cajun roux is made from lard or oil and flour. Most people have the misconception that all Cajun food is spicy, which is not the case. There are a few more differences, and I hope to cover this subject in more detail in a later post, but right now let’s get on with tonight’s dish: Alligator & Shrimp Creole!

Now most of the people I know (excluding chefs) hear the word “alligator” and run for the hills! They wont go anywhere near it, even when it is cooked  — and no longer baring teeth. The fact is, alligators have been hunted and consumed by humans for centuries. The tenderloin I purchased looked no different from boneless chicken cutlets (certainly not green and slimy like some of you think). There are two different species of alligators, one in North America and the other in China. The Chinese alligator is listed as a critically endangered species, while the American alligator is plentiful, and can be found throughout the Southeastern United States. Louisiana and Florida have the most alligators: over one million wild alligators in each state with more than a quarter million more on alligator farms. Obviously, I will use farm raised alligator, and obviously an alligator from Louisiana since it’s Creole. The meat yielded a mild taste somewhat like chicken, and unlike its wild counterpart, which I am told tastes a tad bit more like frog legs or fish. The soft texture is sometimes compared to veal. While this wasn’t my first time cooking gator, it was my first try at a Creole-style dish and it was just absolutely delicious! The Creole flavors where exciting to the taste buds and the alligator and shrimp cooked to perfection.  Bon Appetit!

Mix together oregano, salt, white pepper, black pepper, cayenne pepper, thyme, and basil in a small bowl; set aside. Brown the sausage slices is a small frying pan and set aside.
Melt butter in a large saucepan oven over medium heat; stir in tomato, onion, celery, green bell pepper, and garlic. Cook and stir until the onion is almost translucent, about 4  minutes.

Stir in chicken or fish stock, tomato sauce, Worcestershire sauce, sugar, hot pepper sauce, and bay leaves. Reduce heat to low and bring sauce to a simmer. Stir in seasoning mix and simmer until the flavors have blended, about 20 minutes.

Gently stir in shrimp and alligator; bring sauce back to a simmer add sausage and cook until the shrimp and gator are done, about 20-30 more minutes. Remove bay leaves and garnish with yellow celery leaves or parsley.  Serve with a crusty bread or rice.